During training day 1 or 2, Lori, our education director suggested integrating aspects of modern Israeli life/culture into our language instruction, and while I’m not convinced of its role for novices, (and I’ll probably blog about that topic sometime soon), I took up her challenge…sort of.  I decided that our week 2 extended story-asking demo in Hebrew would be based on a cute Israeli TV commercial.  It would serve as my inspiration and qualify as an authentic resource! (Oy.  Don’t even get me started on that topic!)  I planned to ask a story, dramatize, read, and finally show the clip – as a nice Social Studies-esque tie-in.

This phase of ‘lesson planning’ is critical for T/CI teachers:  Choosing a prompt or storyline or just some high frequency and/or compelling structures, and deciding what other language they will use with their students to talk and ask about.  Often we teachers go way too wide, stuffing a simple storyline with 6 or 10 verb structures or forms, lots of glue and transition words, some rejoinders and other new-sounding vocab.  But we must err on the side of simple and narrow, (I say this to remind myself, too!) especially for novice learners.  In the case of our temple students, we will assume they are all absolute beginners in Hebrew, even though some are ‘sloshers’ (this is Terry Waltz’s excellent term), who have isolated words and phrases, songs, poems, prayers and other memorized chunks from past instruction sloshing around their brains.  Because they have not been exposed to comprehensible, compelling and contextualized extended discourse in Hebrew, we will start building their Hebrew foundation slowly, from the ground up.

Back to the story and the clip.  It’s about a guy who’s sleeping.  He gets up and sleepwalks to the fridge, which is empty, then to the supermarket, which is also empty.  Bingo!!  We have a classic storyline – someone wants or needs something and goes from location to location to find it!

We began asking and dramatizing the plot in our training session.  I instructed one of the teachers to lay down and pretend to sleep…then open her mouth in search of something to eat.  We had her sleepwalk all over the temple library – we even had her open the fridge in the adjacent kitchen!  On my cuing, she considered but rejected several of the offerings on the breakfast buffet – the yogurt, the banana, the bagel – until she found something she liked, “woke up,” and pretended to eat it.  The end.

According to Terry Waltz’s Cold Character Reading (CCR) protocol, the students must hear and comprehend target structures around +- 70 times apiece in an oral class, then have the written version reinforce these target structures another 30 times or so.  I wrote up the Hebrew story, What’s the problem?  but with slight variation for interest, matching the action of the as yet un-screened clip.  I tried to get dozens of repetitions on my targets: ‘is sleeping’ and ‘walks’ as well as the words for ‘There is/are” and “There isn’t/aren’t.”  (A few other verb forms in the story, like ‘gets up’ aren’t really targeted – let’s assume students already know ‘gets up’ from beginning-of-year Total Physical Response [TPR] – Get up, sit down.)   ?מה הבעיה  (What’s the Problem?) is an example of a simple story line stretched out and massaged into an episodic extended block of text with lots of patterned repetition. 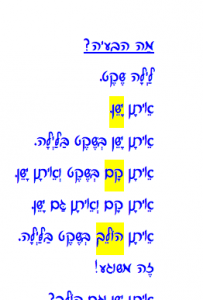 BTW, I count the following # of reps on my targets in the reading:  Sleeps = 12; walks = 12; there is = 18; there isn’t = 13.  I’ll try to double up next time!  These ballpark numbers are for the decoding magic of Cold Character Reading to work; if students are already decoding well in Hebrew, then this is a fine classic CI story with adequate contextualized reps to boost comprehension and retention!

The teachers found it so satisfying to read, and deepened their understanding of how the earlier barrage of comprehensible, compelling and contextualized auditory input prepares their students  for successful reading (more input).

Oh, and here’s the YouTube link to the commercial for Yotvata Chocolate Milk.  Enjoy!

As I mentioned previously, teachers really seem to dig the Novice Hebrew Corpus, as it affords manageability, making story-asking feel less…daunting and unwieldy.  Combining question words with high frequency verbs and cognates or proper names/nouns feels do-able, and I demonstrated lots of engaging circling with these few key ingredients.  With the corpus in hand, we can start to imagine storylines and lines of questioning to ask stories!

Before embarking on the Foundational Skills of T/CI, we explored existing Hebrew ‘legacy’ materials that I’d brought along – basal readers, texts and workbooks commonly found in Hebrew supplementary schools.  Our teachers are now armed and able to recognize the shortcomings of these published textbooks:  They are unappealing – the pictures don’t reflect our students lives or interests; they are boring – nothing really seems to happen in the brief scenes and scripted dialogues; the Hebrew itself seems randomly chosen or focuses on religious holiday vocabulary, not basic face-to-face communication, and is not controlled for frequency or massive repetition.  It’s all over the place!  Furthermore, the beginner level basal readers invite students to decode lists of nonsense words and isolated syllables (in order to practice the Alef-Bet)…an activity long since abandoned in Language Arts classrooms, and definitely not a respectful task!

Session 2 ended with teachers brainstorming an extended scene based on  2 onscreen target structures:  ‘Sleeps’ and ‘hears.’  Imagine the possibilities!  Someone (Who?) is sleeping and suddenly hears a noise.  What is it?  An ambulance?  A dinosaur?  His telephone?  What happens next?

The collaborative story-spinning possibilities are limited only by our (students’) creativity!

We recently completed 8 hours of Teaching with Comprehensible Input (T/CI) teacher training at Temple Beth Israel (TBI).  I presented 2-hour sessions on Monday and Wednesday mornings, for 2 consecutive weeks.  There were (usually) 9 participants, including 6 TBI teachers and one teacher from another temple, Lori (the education director), and me.

Lori made sure we had a lovely breakfast spread for each training segment, and we shared a bite around the table together before transitioning to our presentation space in the cozy temple library.  On the first day, I briefly explained ‘How I got here’ and we went around the table answering the question, “What do I hope to get out of this Hebrew instructional training experience?”  Not surprisingly, everyone was looking for ways to spice up Hebrew school, get and keep our kids interested and engaged, and of course, impart real-world Modern Hebrew communication skills.

As I launched into Reimagining Modern Hebrew Language Instruction, I saw my ‘students’ nodding their heads, finding the concepts to be quite intuitive, especially the moms in the room who had observed their own toddlers’ evolution to speaking.

The friendly breakfast and pre-training chit-chat had helped establish a cooperative tone for our first foray into story-asking.  My subjects were readily ushered into a short & silly Spanish demonstration-story about a princess who went from place to place looking for her beloved…chocolate.

We debriefed the strategies they observed, and ended the session by perusing my Novice Hebrew Corpus, so that my ‘students’ could see for themselves the wealth of Hebrew/English cognates available to exploit, not to mention the other hi-frequency target language.  I’ve found that providing teachers with a list of words – and this one is around 10 pages long! –  they’ll be using in class, can be an effective way to start rethinking curriculum!

Last fall (2015), our temple’s intrepid education director, Lori Sagarin, invited the parents of 3rd graders to a חגיגת עברית (Chagigat Ivrit), a ceremony celebrating the onset of Hebrew study at our temple’s supplemental (Wednesday evenings and Sunday mornings) school.  As a Hebrew devotee and World Language teacher myself, as well as a Hebrew school mom, she was preaching to the choir about the benefits of language study and its value in exploring Jewish identity.  This was an exciting journey my almost 9-year-old daughter was about to embark upon!  But more intriguing to me, though, was Lori’s mention of a recent article she’d written in the journal, The Aleph-Bet of Israel Education.  In her piece, Modern Hebrew in Personal Identity Development,

Lori not only rejoices in her own Hebrew trek, but also bemoans the sorry state of basic Hebrew communication skills among K-12 diaspora Hebrew students.
This was my opening, my moment, my invitation to try to make a difference and offer a hopeful and practical alternative to Hebrew school as usual.  My recent re-tooling after over 20 years as an elementary Spanish teacher on Chicago’s North Shore would certainly apply to Hebrew instruction at my temple!

I sat down to answer Lori’s impassioned plea.  It took me days…. (See a version of that lengthy response to Lori, here.)

I waited…and thankfully, Lori was excited and inspired by my reply.  Within weeks, I came to her office to present on Comprehensible Input instructional strategies.  To Lori it felt intuitive and exciting, and she was ready for the next step.  Soon afterwards, the two of us wrote a “Best Practice” grant proposal to the Community Foundation for Jewish Education (CFJE) entitled, Fortifying Hebrew Instruction with Comprehensible Input Strategies, and the temple was granted funding in the spring of 2016.

The grant funds cover some materials – a document camera, a digital projector, a set of dry erase lapboards & markers – plus some classroom props and posters, but most of the funding will go toward teacher training, ongoing coaching and mentorship.  I will use this blog – C’movan – כמובן – to document and share our work.

I welcome you, and invite you to join me on this journey, and contribute to our learning, ביחד – together!