Chicagoland is sweltering under a September heat wave this week.  It was nearly 90 degrees in my (day job) classroom with similar humidity (no A/C).  I taught in that before coming to teach my first ever (air conditioned!) class at TBI.  The afternoon’s festivities kept me jittery, and amid the sweaty freak-out lead-up, I realized that 30 minutes for absolute newbies would go by in a flash.  I had waaaaay over lesson-planned, so I chose to prune & snip, thereby shedding some anxiety.

I wanted our kids to walk away feeling encouraged.  And successful.  And smiling.   Those were my ‘curricular goals’ from which I decided to backwards-plan.  No worries about hi-frequency structures, circling, repetitions, or the like… yet.  Just a fun, informal meeting & intro with some back-and-forth Hebrew communication.

The first group of 20+ 3rd & 4th graders included my own daughter (and #1 Hebrew cheerleader!)  I started by introducing myself to the group in Hebrew:  .אני עליזה.  אני מורה לעברית.  I wrote nearly everything I said, as it came up.  On the dry erase board in cursive/no vowels, in black, and with the English translation in red below it.  I went back to slowly pause ‘n point at it frequently.  I will be experimenting with Cold Character Reading (CCR), but these kids have also had exposure to the Alef Bet starting in 2nd grade.  So I was getting a baseline on their decoding skills.  Some were stronger than others, but it looked as though many could read the short Hebrew words and phrases on the board, when repeated, prompted and in context.

Next, I distributed their lanyard name tags.  Most kids recognized their Hebrew names orally, but their English first & last names were pencilled on the back, just in case.  I jotted, ‘אני פה’ [‘I’m here’] on the board, and after a few repetitions, they got the hang of responding, ‘אני פה’  when they heard their name.  I modeled courtesy with ‘תודה’ [‘Thank you’], and I could feel the excitement rise as the kids could readily produce these short and appropriate utterances upon hearing their name and taking their tag!  They were proud to share what they knew.  By the time all the tags were distributed, we were nearly halfway through class!  The remainder was spent doing Total Physical Response (TPR) – the kids responded to my commands, demonstrating comprehension (or not) by doing as I requested:

Next I folded in ‘slowly’ and ‘quickly.’  Boys stand up quickly;  Girls sit down slowly…  This side [of the room] stands up; the other [side] sits down….  Just as the kids were about to ease back slowly into their chairs, I commanded them to quickly stand up!  We played unpredictably like this for a few short minutes…and they LOVED it!

When time was almost up, I asked them to reflect in English about how it felt to hear Hebrew this way.  The kids pointed out that the gestures and acting supported their understanding, that they relied on the gestures.  This was a great place to teach them the ‘stop signal’ – one fist pounding the opposite palm noise that tells me, “the meaning is not clear.”

The 5th-6th-7th grade class (50+ kids) was WAY TOO BIG.  I had a challenging ‘lift-off’ due to the sheer numbers.  Passing out  nametags and meeting the students felt long and boring, and allowed English chit-chat to erupt.  Once the Comprehensible Input got going though, we steadily got our craft aloft.  During the last several minutes of this class (from +- 5:30-6:00pm), I acknowledged how hungry we all were (patting my belly and gesturing eating).  We launched into a mini-scene with one boy walking (running?) quickly to Poochie’s (local burger joint) – I’d posted a mini poster with the restaurant’s logo on one wall – while a girl walked slowly to Portillo’s (a competing local burger joint).  I asked those who liked Poochie’s to run to that classroom location s-l-o-w-l-y; and the Portillo’s-lovers to walk to theirs quickly.  Much narrated walking and running between restaurants ensued.  By the end of class, the kids were standing in their respective restaurant zones, stimulated, energized and, well, HUNGRY!

Just before the bigger kids left, I asked them to reflect on today’s Hebrew class:

“All the gestures and acting helped me understand what you were saying.”

“I understood all your Hebrew words!”

“I could read the words on the board.”

“That was really fun!”

Encouraged, successful and smiling.  Not a bad way to end the workday.

PS:  I will try to edit and post parts of the videos of these classes soon.

PSS:  Here’s the link to the video! 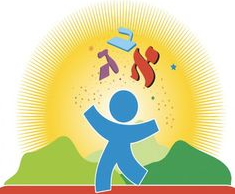 On Day 4 (our final session) we tried to nail down some logistics, though since we’re rolling out an entirely new program, we will have to tweak it as we go.  Some of our challenges are good ones – space is tight, classrooms are full, and we don’t have any spare rooms to dedicate to Hebrew instruction.  We’ve already got a workaround as our awesome cantor and 6th grade teacher, Marla, has offered up her (largest) classroom as the dedicated Hebrew room and she will teach in a smaller classroom.  Marla says she’s so excited about this new direction for Hebrew instruction that she’s willing to do whatever it takes to make it work!!

Here are some other adjustments we’re making to accommodate the new Hebrew program – though nothing is set in stone.

I then walked the teachers through this blog so that they could independently refer back to my core documents and our 8 hours of learning together.

Finally, to reflect on the training experience, the teachers responded to these questions:

“What strikes you about these learning strategies, and how do you think your students will respond?”

Here are some of the teacher comments:

“I’m so glad the focus will be on high-frequency (HF) words.  The textbooks don’t really focus on them, and they’re [textbooks] really all over the place with the language.”

“I can see this as being very engaging and enjoyable for the kids.”

“I like that we’re connecting the oral sounds to physical movement with TPR (Total Physical Response).  The repetition of the hi-frequency verbs will embed meaning into their brains.”

“I’m very excited about this.  In the past we went very fast and we tried to do too much!  Now we’re going to take a step back and really make sure we’re doing it in repetitive chunks and make sure everyone understands what they hear and read.  This will really improve the reading quickly!”

“This approach will help them tie everything they’ve learned together…they’ll finally be able to understand it.”

“I can see how it’ll work well with the 4th graders, but I’m interested to see it with the 7th graders because they’re notoriously jaded!”

“I feel very energized.  This is going to be a lot of fun to teach!  I feel like a lot of these practices are intuitive and I feel like I’ve tried some of them over the past few years, but I’m excited to watch and learn this fall so that I can get more comfortable with it.”

Well.  My first Hebrew Through Comprehensible Input training is behind me, and the challenges and thrills of teaching Hebrew lie ahead.  Opening Day is Wednesday, September 7.  Stay tuned!